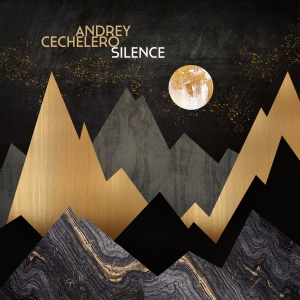 Featuring fifteen never-before-seen themes, inspired by poetic texts from the 1920s and works by Victor Hugo, the brazilian composer and instrumentalist, Andrey Cechelero, presents us with SILENCE, the 25th album of his successful career.

Creatively using daily sounds and noises – such as twigs being stirred, sounds of train stations from around the world, noises of people, etc. Cechelero also explores different sounds on the piano: It highlights the sound of the pedals, hammers, strings and mechanism of the instrument; sometimes adds complementary timbres in electronic synthesizers. The album also features the special participation of Julie Dratwiak, a French teacher and poet, friend of the artist and who participates in the tracks Le Silence and Station to Station.

“One of the poems I read by George Haldas – Swiss novelist, poet, philosopher and translator – called LE SILENCE, proclaims in its first verses ‘Ce que nous vivons d’essentiel, nous le vivons land le silence’ (what we live in essential, we live in silence). From this same author is also the thought ‘It is in Silence that the Invisible makes its way.’ It is in this silence that I invite reflection, a dive into the essentials of each one of us.” – Andrey Cechelero